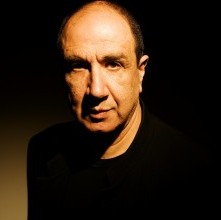 He was born in Baghdad in 1951 and came to Israel as a young child.
He studied Hebrew literature and philosophy at Tel Aviv University and drawing at the Avni Academy of Art.
He has worked with street gangs, and currently teaches literature and leads creative writing workshops.

He has published 11 volumes of poetry (The last called “horse power") and two book for children with his daughter Shirly (The last called “monkey tough, monkey bluff”).
He has been translated into 41 languages.
Selections of his poems have appeared in Arabic translation, French, Catalan, Albanian, Italian, Macedonian, Yiddish, Coroatian, Napali, Dutch, Danish, Portuguese, Spanish, Greamn and English.

He is recipient of the Prime Minister's Award, Yehuda Amichai Award for Hebrew poetry, Ramat Gan prize for poetry, The "Wine poem award" in Struga Poetry Evenings, Macedonia, 2005 and Hans Berghuis prize for poetry 2006 in the Maastricht International Poetry Nights, Holand.
In 2012, he has been awarded the Cross of The Order of The Knights for a Distinguished Service OF Poland.
In 2014, he has been awarded the knight of the Order of Arts and Letters of France.

He recorded with the musician Elliott Sharp 3 CD's: “revenge of the stuttering child”, “Poverty Line” and “Short History of Vodka.”

He is a member in the Public Council of "Batsheva Dance Company" and at the Hebrew-Arabic Theatre.

A Love Poem for the Mederano Circus Acrobat