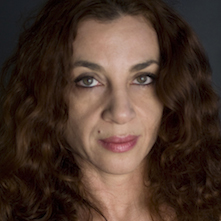 She is an award winning poet, editor and a major translator of Hispanic literature. Author of five poetry books and one children's book, and editor of three poetry anthologies. She has resided in Buenos Aires, Bogotá and New York. Currently lives in Tel Aviv.

She is the editor of the collection ‘Latino’, for translations from the Hispanic literature, the collection ‘Local’, for contemporary Hebrew prose, and the literary review ‘Lights’, for new writing after the masters.

She often participates in national and international poetry festivals, and cooperates with musicians in poetry performance.